Big Sky Draft Horse Expo began when the Powell County Museum & Arts Foundation organized Montana Frontier Days with a show in September 1995. This event featured teams and four-up hitches of draft horses and mules in a parade and competition. A chili cook-off and cowboy poetry provided entertainment. A second show with the same activities was held in 1997.

The Tradition Continues On

The Big Sky Draft Horse Expo has been the One and Only Draft Horse Show in Montana for the past 22 years. The draft horse show provides a family friendly event that offers education, cultural history and fun for all ages. Feel firsthand the immense horsepower of these gentle giants when they pass in front of the grandstand. The Big Sky Draft Horse Expo offers the beauty, grandeur and sheer power of today’s draft horses. We encourage you to see the sites and visit the Grant Khors Ranch to experience a working ranch using draft horses at the turn of the century.

The Expo is part of the North American Six-Horse Hitch Classic Series. Each year Six Horse Hitches across the United States and Canada compete at shows such as ours to accumulate points for the Classic Series. Close to two hundred hitches travel within their region, competing at sixty qualifying shows throughout North America. The competition builds to a climax at the end of the series when the four highest point hitches in each of the three breed classifications are invited to compete for $80,000.00 in premiums at the North American Six-Horse Hitch Classic Final Championship. We are excited to have ten (10) of these Six- Horse Hitches in our region, join our show this year.

The Big Sky Draft Horse Expo promotes, demonstrates, educates, and entertains the general public about draft horses and mules and related equipment. Several different breeds of magnificent draft horses and mules are presented for your enjoyment. There will be several classes that will be presented to you during the three-day show. However, this show is not just about the presentations, it is about teamwork. Many of the participants are family owned hitches that have shown for several generations. These families are up as early as 4:30 am getting their horses and mules ready for the show.

The public is encouraged to visit the barn and view the prepping, grooming of these horses and mules. There is bathing, combing, braiding of the animals and the washing and polishing of the hitches and equipment that is used. This lets the public see what devotion, hard work and love these families have for their animals. 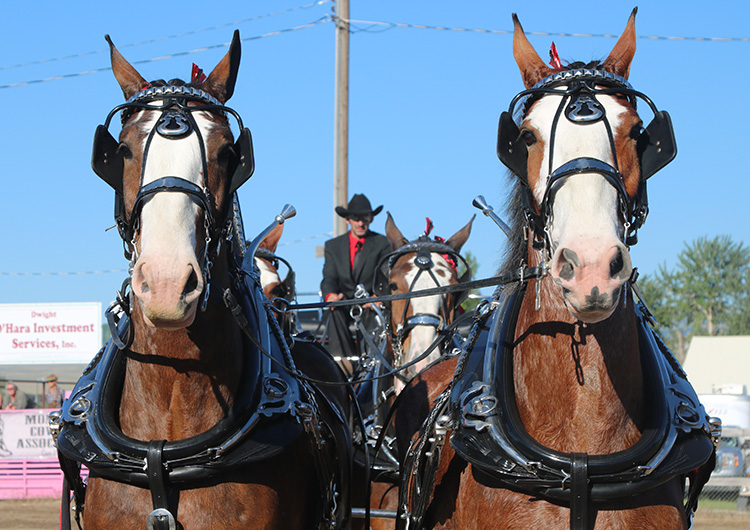