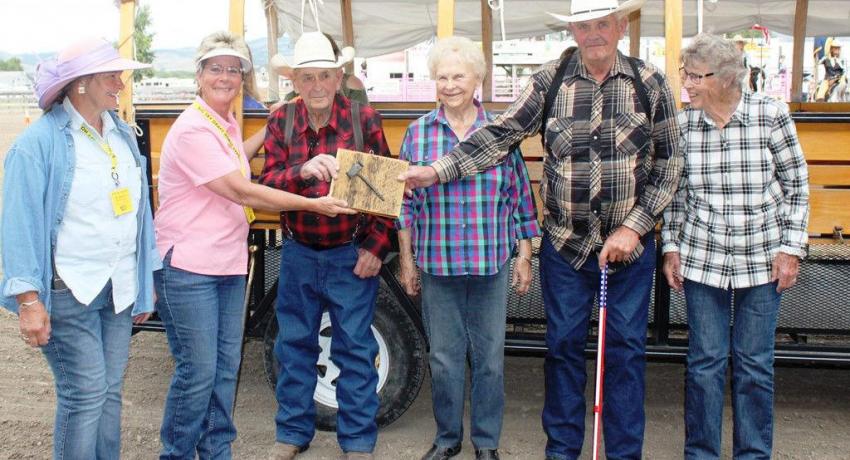 All years are auspices in some way, and 1908 is no different. This is the year that the Model T Ford was introduced. It marked the beginning of the end of draft animals as the major source of motive power. It was also the start of the Benson Ranch near Avon, and later at Deer Lodge.

Motorized equipment such as trucks and tractors continued to replace draft animals after 1908 at an ever-accelerating pace. By the mid-1930s the draft era was essentially finished. World War II saw a small increase in draft use because of gas rationing. Only the Amish today continue to use horses and mules for primary transportation and field work.

The Benson Ranch is notable for their continued dependence on draft horses until the mid-1990s. They worked fields alongside railroad tracks and highways. These transportation routes were first built with horses and mules. In 1960 when the interstate bypassed Deer Lodge, Bensons were still haying with horses. People parked along the freeway to watch horses pull mowers, rake hay with dump (sulky) rakes, bunch and move hay to the stack with buck rakes. Horses pulled up the beaver slide baskets of loose hay where it dumped onto the stack. Most of these people were amazed at the scene before them. Few would make the connection that draft horses were also used to build road and rail beds some 60 years earlier.

The Benson Ranch home place is at Avon. Earnest Benson, born in Sweden, worked early on driving ore wagon teams from Castle to East Helena. He later started ranching near Stevensville but moved from the Bitterroot area at the instance of his wife Ida. Rocky Mountain spotted fever was claiming lives and she wanted to protect her family. Their son John, age 14 at the time, remained on the ranch. He married Ester (Welch) and they had a family of 3 boys and 2 girls. Two of the boys, Bruce and Fred became partners and third-generation owners. Bruce and his wife Pauline (Bignell) remained on the Avon place, while Fred and his wife Dorothy (Eliason) live on the ranch north of Deer Lodge (acquired in 1954).

The Benson families are well known for helping others. Their Little Blackfoot and Deer Lodge valley communities are important to them. Stories abound such as unhooking a team from the feed wagon to pull a neighbor’s car out of the snow, or helping neighbors to break or buy teams. They have taken those teamster skills learned from their grandfather and father to do their work and teach others.

The Benson Ranch has been in the family more than a century. It is one of the last ranches to depend on teams, doing so a generation after most ranchers turned to tractors.

The Montana Draft Teamster Hall of Fame is pleased to recognize the Benson Family Ranch for their long use of draft horses, education of others, and service to their communities. The Ranch is a long time sponsor of Draft Horse Expo.